Mehdi Hasan On How To Win Every Argument

Mehdi Hasan is one of the most formidable debaters and interviewers of our times, famous on both sides of the Atlantic for the hard-hitting exchanges he conducts with politicians on his MSNBC television show. And on March 13 he comes to the Intelligence Squared stage in London to reveal his tips and techniques of persuasion, which he sets out in his new book Win Every Argument: The Art of Debating, Persuading, and Public Speaking.

As Hasan will point out, there is no escaping arguments. Whether on Twitter, in Parliament or at the dinner table, we all feel the very human urge to voice our disagreement. Arguing itself often gets a bad rap and is blamed for everything from political polarisation to marital breakdown. But as Hasan will contend, debate and argument are the very lifeblood of democracy. They are a means of establishing the truth, of opening our minds to new ideas and of working our way through problems. We just need to get better at them.

Taking us from Demosthenes to Churchill, from Cicero to Martin Luther King, Tony Blair and Elizabeth Warren, Hasan will show the importance of the art of persuasion throughout history and explain how we can all master this vital skill.

Book bundles include one ticket for the debate, plus a copy of Win Every Argument: The Art of Debating, Persuading, and Public Speaking by Mehdi Hasan  with free UK P&P. Books will be posted within 1-2 weeks of the event finishing. Click here to purchase a book bundle. 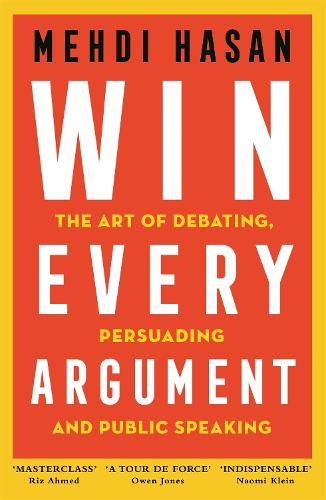 Mehdi Hasan On How To Win Every Argument

Livestream access is included with Intelligence Squared+. Access to the livestream can also be purchased for just this event.

Award-winning British-American journalist, broadcaster and author of Win Every Argument: The Art of Debating, Persuading, and Public Speaking.

Wward-winning British-American journalist, broadcaster and author. Hasan is the host of The Mehdi Hasan Show, which airs on both MSNBC and NBC’s streaming channel Peacock. He has interviewed everyone from General Michael Flynn and Erik Prince, to Bernie Sanders and Alexandria Ocasio-Cortez, to Russell Brand and John Legend. Hasan is a former columnist and podcaster at The Intercept, and his op-eds have also appeared in The New York Times and The Washington Post. In Britain he was formerly the political editor of The New Statesman.

Guardian columnist and former foreign correspondent. He is the presenter of BBC Radio 4’s contemporary history series, The Long View, as well as two podcasts, Politics Weekly America for the Guardian and Unholy, alongside the Israeli journalist Yonit Levi. He is a past winner of an Orwell Prize for journalism. He is the author of twelve books, the latest being The Escape Artist: The Man Who Broke Out of Auschwitz to Warn the World.